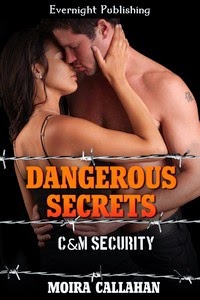 
After a harrowing attack she barely survived, Mallory Thompson knows she needs help. The police can only do so much without a description of her attacker. On the advice of a detective she turns to C&M Security in the hopes of getting some protection while the police hunt for the man who shot her.

Trent McDonald, ex-Marine and bodyguard at C&M Security, can’t believe the case his boss hands him. Rather, he can’t believe the woman he’s being asked to protect. Mallory is stunning, amazing, and he knows the instant he sees her picture he’ll do whatever it takes to keep her safe.

What neither of them expected was just who was behind the attack on her. In this game of life, or death, everyone seems to have dangerous secrets.

The pressure on Mallory Thompson’s scalp preceded the water sluicing away from her head and face. Sucking a breath into her burning lungs, she kicked harder. She had to stay above the water. She couldn’t let him push her down again. She didn’t think he’d let her up if he did.
“Where. Is. The. Drive?” The man, whose hand was tangled in her hair, pushed her into the lake again and then hauled her back up.
She didn’t know who he was, and she definitely didn’t know what the fuck he was talking about. But she couldn’t say that again, not with her body desperately trying to suck in air. Spots danced before her eyes. Even if her vision hadn’t been impaired, she’d never be able to identify him.
There was a lantern behind him, so his face was in shadow. He had on a hoodie and a cap but that’s about all she knew for sure. His hands were covered in leather gloves and he wore work boots.
The boots she knew about from the six kicks he’d delivered to her ribs, stomach and the one to her jaw before he’d dumped her into the lake.
His hand tightened in her hair and she reached up with a heavy arm to try and grab his wrist. Anything to take some of the pressure off her poor, screaming scalp. Then he shook her.
Mallory couldn’t hold in the whimper of pain, it was too much. She was in absolute agony, she was wet, she was cold, she was being dunked repeatedly to the point where she nearly drowned and now he was doing this?
“I don’t know what you are talking about,” she managed to get through her chattering teeth.
“Bullshit. I saw them give it to you. Where the fuck is the fucking drive, bitch?” he screamed at her, shaking her again.
Whimpering in pain, Mallory clawed at his arm. Her subconscious mind knew what her conscious mind was just cluing into. He was going to kill her if she didn’t get away from him. “I don’t know what you’re talking about. No one gave me anything, you asshole.”
Okay, calling the guy holding her life in his hands an asshole? Probably not her brightest move.
The slap she got to her face told her that. But luck was finally on her side and she caught skin with her nails and dug in hard, scraping at his arm, wrist, or hand, whatever it was. He let go with a yelp.
Kicking her legs hard, she swam away from the dock and deeper into the lake and the darkness.
“You fucking bitch!” he screamed.
Which was closely followed up by a sound that any TV or movie watcher knew. The slide snapping into place on a gun.
Trying to swim harder and faster, Mallory knew she wasn’t gaining a lot of ground. She wasn’t a great swimmer on the best of days. But she kept going as best she could.
When she heard the first shot, she screamed and flinched automatically. The missed strokes sent her under the water and she came up sputtering. There was a curse from the shoreline, harsh and angry sounding. She didn’t know where the shot had gone, but she had no new aches and pains so she wasn’t fucking complaining.
There was another shot. It didn’t miss. She felt the burn through her shoulder and the wind was knocked out of her. She couldn’t keep swimming, it was too hard, too exhausting.

Moira Callahan is a Canadian born and raised author. She loves to write, especially when it involves steamy, and wildly hot, sensual stories. Though she’s not willing to fence herself in with just one genre, her first love is the Romantic story. She’s not picky about what the sub-genre might be, as long as it has a HEA ending—her only real concern when writing a story.

As an author she prefers to write strong alpha males and women who know exactly who they are. She easily recognizes that no human being is perfect and therefore, neither can her characters be. "Writing must come from the heart but must also utilize the brain. Characters should be strong but also have a weakness to make them as real and as like-able as possible to the reader."

You’ll find her characters are less than perfect, just as she proudly claims to be. She likes to write them with a trait that is all her and then borrow a trait from a friend to round out their personality. This, she says, is to make them the most perfectly imperfect person she possibly can.

Moira always ensures that everyone knows how thankful she is to her best friend. For pretty much everything. Mainly though she is forever grateful for the encouragement to get back to writing. And then the "mild" harassment necessary to get her to finally submit her first book to Evernight Publishing in March of 2014. Which Moira was ecstatically pleased to have accepted.