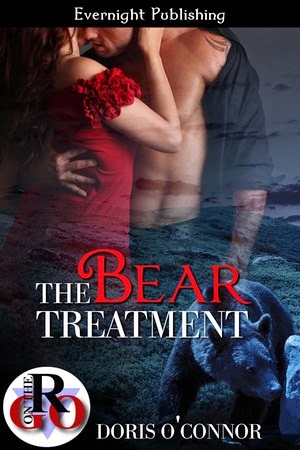 There is nothing worse than being dumped by your boyfriend is there, even if that person turned out to be a right schmuck. Louisa doesn’t have much luck in the boyfriend department, mainly, because the one man she really wants is way, way, way out of her league—or so she thinks.

He was so way out of her league it wasn't even real. Not only because he was very much a Dom, but also because Louisa didn't have the first clue how to be what he looked for in a woman. After all, he would no doubt want to settle with another shifter like himself.

Somehow she didn't think a smart mouthed, overweight, thirty-something, fresh out of yet another failed relationship, screw-up like her, would be his idea of the perfect submissive.

Little does she know that this Dom has just been biding his time and when she turns up in his spa, ready to experience a taste of the lifestyle, she is in for the bear treatment…


There’s nothing quite like being dumped by another good-for-nothing boyfriend to focus a girl’s mind. Fun has been missing from Louisa’s life for far too long, and a bit of wax play at the spa-with-a-difference is just what she needs to take her mind off her birthday.

What can possibly go wrong? It’s not as though the man she’s been secretly lusting after for years would turn up and see her in all of her wobbly bits glory, or give her one mind blowing orgasm after the other, is it?

That would mean she is getting the bear treatment. You know the one—ends up being mated to one droolworthy, dominant, bear shifter—and ticks off the council no end. One thing’s for certain. After this birthday nothing will be the same again.

When he bit down on her clit her orgasm rushed through her with so much force that she screamed and bit her lip hard enough to taste her own blood, in an effort to muffle that scream.
They were on top of a crowded restaurant, for God’s sake. If she turned her head she could see the people dining below. All it would take was for one of them to look up and they would see her sprawled along the table with Luke once again lapping at her cream as she gushed her juices into his waiting mouth. The thought that one of the diners would look up, made her orgasm burn hotter, and with her body still shaking in delicious aftershocks she almost didn’t notice the slight pressure against her little puckered hole until Luke slipped a slick finger wet with her own arousal knuckle deep into her ass.
She would have bowed off the table had his hot hand on her tummy not held her down, and she lost herself in the heated stare of his golden eyes as their gazes connected.
“That’s my girl.” His voice had dropped an octave, dripping in lust, and her body went limp under his possession. “This ass and this pussy are mine to do with as I please are they not, my sweet Lou?”
He pushed deeper into her butt, and she gasped at the burning pain of another finger slipping past that ring of muscle. Discomfort gave way to heat when he started to thrust those two fingers in and out of their tight confines, and added the thumb of his other hand to her clit and rubbed that sensitive bundle of nerves in small circles designed to push her over the edge once more.
The strange sensation in her ass awakened unused nerve endings, and she clamped around his digits, increasing the heady sensations bombarding her.
“That’s it, my sweet. Ride those fingers. I can’t wait to see your little hole stretched with a butt plug to prepare you for my cock, and you will let me take you back here, won’t you?”
The veins on his neck stood out, his smile showed his fangs, and with the eyes of his bear looking down on her he never looked more the wild animal he had inside than right now. The thought should have terrified Louisa, but instead it had the opposite effect on her. She was his prey, his for the taking, and the thought turned her on even more.
“Yes, yes, God yes, I’m yours to do with as you please, Sir.”
Her whispered answer made him step up his assault on her senses, and everything inside of her drew tight as she climbed up those rungs of lust until the world narrowed to just the feel of his fingers in her ass, and his big body covering her.
Luke bent closer, not once slowing his fingers as they fucked her into another orgasm, and then he kissed her. His tongue mimicked the action of his digits, and she kissed him back until her lungs screamed at her they needed air, as her body shook in the grip of the tremors wracking through her. She winced when he withdrew his fingers from the tight clasp of her ass, and then gasped when he shrugged out of his shirt. The man’s torso was magnificent and sprinkled with liberal amounts of hair that she wanted to run her fingers through. His pectorals flexed as he threw the shirt across the room, and she let her gaze admire the play of muscles. The way his hair thickened to a dark trail that acted like a beacon to his magnificent cock. Despite her earlier attention to that particular body part, he was once again erect. Veins ran along the length of the impressive organ, and the thick mushroom head glistened in the muted lighting of the room. Louisa licked her lips, suddenly desperate for another taste of his salty musk, and Luke laughed. Low and menacing, the sound was more animal than human, and set her arousal to fever pitch.
“Not this time, my sweet. This time I want to bury my cock into your tight cunt. I want to see your lips stretched around my girth, as you struggle to take all of me, but you will, won’t you, pet? You’ll milk my cock like the good little subbie you are, and you’ll gush your cream all over my dick again and again, won’t you?”
“Yes, Sir.” How she managed to force the words past her kiss swollen lips she would never know. Her gaze was riveted to his cock, where Luke was fisting himself slowly. He squeezed the tip of his dick until his pre-cum slid on his fingers and with a wicked grin held those digits up to her mouth.
Louisa opened up eagerly, only too willing to taste him again, and she groaned when he hooked those fingers inside her mouth holding her in place while he ran the tip of his erection through her wet slit repeatedly. He bumped into her clit at every upstroke, sending jolts of electricity through her system, and her nostrils flared as she tried to breathe through her nose.
“Look at me, pet.”
His rough command made her eyes snap to his again, and she swallowed hard around the digits in her mouth. The intensity of his golden gaze was hard to take, as he pinned her in place with the sheer force of his will.
“You’re mine, and when I sink my cock into your cunt, I’m going to sink my fangs into your flesh and mark you as mine.”

Glutton for punishment would be a good description for Doris... at least that's what she hears on an almost daily basis when people find out that she has a brood of nine children, ranging from adult to toddler and lives happily in a far too small house, cluttered with children, pets, dust bunnies, and one very understanding and supportive husband. Domestic goddess she is not.
There is always something better to do after all, like working on the latest manuscript and trying not to scare the locals even more than usual by talking out loud to the voices in her head. Her characters tend to be pretty insistent to get their stories told, and you will find Doris burning the midnight oil on a regular basis. Only time to get any peace and quiet and besides, sleep is for wimps.
She likes to spin sensual, sassy, and sexy tales involving alpha heroes to die for, and heroines who give as good as they get. From contemporary to paranormal, BDSM to F/F, and Ménage, haunting love stories are guaranteed.