The Prince's Forever, Guardians of the Light 2 (M/F) ~ April Zyon 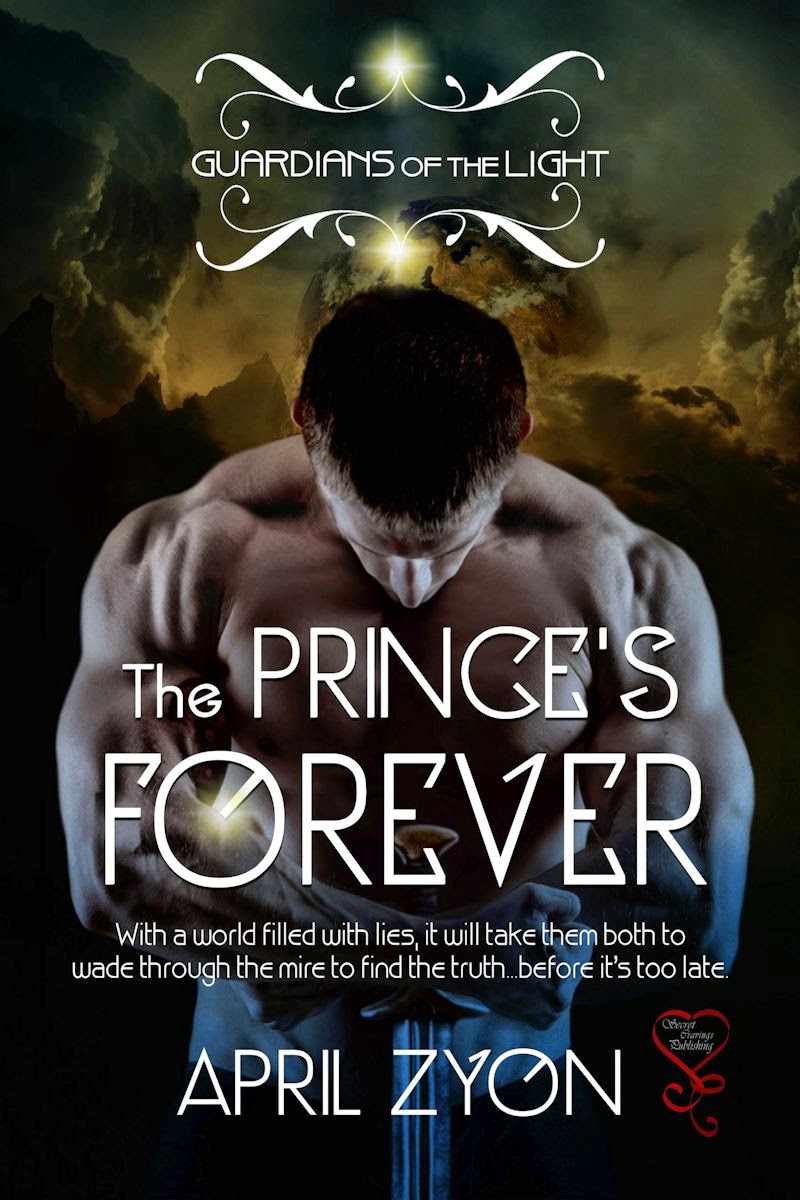 
Riley Jensen has always known a lie for what it is. When the lies the world tell on a daily basis became too much she sought out a sanctuary behind thick walls. Only the lies didn’t stop at the door, they followed her and now she has a mystery to unravel. Unfortunately it appears someone else is looking for her.

Hector is a warrior, first and foremost. One who’s been forced to watch generation, after generation come and go. But he is a man with a purpose, a greater calling, one that demands his all to protect Humanity from the evils that wish to enslave it. Finding the one to call his own was nothing more than a dream, until he meets her.

Danger will hunt her. Lies will blend with truths. And only one of the Vestal’s can separate it all to show the Guardians the path.

He suddenly rolled over her, his larger body pressing hers down into the bed. “I like being very hands-on in my demonstrations. It doesn’t mean that we won’t be having a little discussion, as well. After all, without a constructive and mutual exchange, how can we learn what the other likes?”
Riley licked her lips again. “I think that we should definitely do hands-on.” She moved in just a bit closer to him and rubbed her leg against the growing and impressive erection that he was sporting. “I think that we should get undressed and figure out just how well we might fit together.” That was her first thought, at least—getting naked with him.
He smiled slowly and shook his head. “Not quite yet,” he said softly. Lowering his head, he nipped at her jaw. “There are a couple things I should mention to you. Especially since you’re rather new to all of this, I’m guessing, from your earlier reactions.”
His mouth moved down to her neck, his lips and teeth lightly teasing her. “I’m very dominant in bed. As a warrior, I need to be. I have certain skills that can be very deadly in any situation, so it’s just easier for me to be in control at all times. I’m not saying that you won’t ever have a chance to be on top, as it were, just know that for the most part, I have to be in complete and total control.”
“I’m perfectly fine with that.” She arched against him and bit her lower lip. “I think that I was born to be submissive.” If her reactions were anything to go on. She was perfectly happy to follow his lead and the idea of him being in complete control thrilled her. She wanted more. Hell, she needed more and knew it. She had to have him. “Because I know that no matter what, you will always ensure that I have as much pleasure as you.”
“Definitely,” he breathed against her pulse. When he sank his teeth into her neck, at the point where it joined her shoulder, she jolted against him. The bite didn’t hurt—it was just a bit of pressure from his teeth before he scraped them over her skin lightly. “I think we’ll be just fine in all aspects, Riley. Now, I want you to get naked, fast if you would please.” He pushed up and off her and was standing at the end of the bed before her brain even registered he’d actually moved.
She wouldn’t and couldn’t deny him. She stood and stripped out of her clothes as fast as she could. Licking her lips, she watched him with her hands at the clasp of her bra. “Why is it that I’m nearly naked and you aren’t even pulling off anything?” She stood there in her peach-colored bra and panties, silk and skimpy, with little bows at her hips and between her breasts.
He tipped his head slightly and pulled his undershirt off, tossing it to the side. His hands went to his pants, undoing them before he bent to strip them down. Interesting tidbit—Hector goes commando. As he straightened, he tossed them to the side with the rest of his clothing and cocked a brow as he stood there, naked.
Riley’s eyes were on his rather impressive erection. The man was hard and large, all over. She tugged off her bra and tossed it somewhere behind her. Pushing her panties down, she moved back to the bed. Her body was aching for him. She wanted to touch all of the scars on him, kiss them, and try to get him to understand that she hurt for his past hurts. She ached because of the pain he had endured.
“On your back. Arms over your head. You can hold onto the headboard, if you’d like,” he told her. He stepped closer to the bed, but didn’t climb up as he watched her with hungry eyes. “Then, I want you to spread your legs, bending your knees up to show me all of you.”
Riley did just as he instructed, gripping the headboard tightly. She shifted her bottom just a bit and allowed her thighs to open widely.
A low growl sounded from him as he leaned onto his hands, climbing up between her legs. He brushed a kiss to her inner thigh, meeting her gaze as he began to nibble down toward her pussy. Not once did he break the connection, even as he lifted to give her other thigh the same treatment.
Riley wouldn’t allow her eyes to turn from his. She was drawn to the heat in his gaze. She couldn’t turn away, even if she wanted to. She lifted her hips slightly, biting her lower lip and begging, “Hector, just a bit lower.” She wanted to let go of the headboard and put her hands on his head, but she let him do with her body as he desired.
Her words earned her a sharp bite to her inner thigh. It hurt for a moment, but then he was soothing it with his tongue. Sitting up, he pressed her legs wider as he lowered his head, his gaze still on hers. She heard him inhale and saw the look of pleasure that rolled over his face as he took in the scent of her body calling to him. “You’re very wet. I like the way you respond to me, Riley. Would you like me to touch you, or would you prefer I feast on your pussy first?”
She didn’t know. She needed both, wanted both, and God help her, she was going to scream without both. “Please,” she whimpered and looked up at him with need and passion painted over her features. “I’m yours. Do whatever you want.” She gave full control to him because she knew, without a shadow of a doubt, that she would enjoy everything he gave her.

Having been a lover of the written word all her life April has always wanted to expand her horizons and write something that could be shared with the world. Only one thing held April back, the fact that the letters and numbers mixed and jumbled more often than not. Diagnosed with Dyslexia when she was eight years old April had to work her butt off just to be able to keep up with the other kids in reading and writing, so her love for fictional writing was tossed to the wayside for the moment. Time marched on, as it always does, and she forgot her childhood dream of becoming an author and instead focused on what she had to - creating a career for herself. As the endless waves of time passed the shores became less rocky and more sandy, a place where she could find an even foot. That and Microsoft invented Word. Halleluja.This is where April began her journey into the written world, the world that her imagination had been ceaselessly creating for her entire adult life. Now she has been given a chance to let her literary wings unfold and fly, thanks to her amazing publishers. Now its time to let the dream take flight and watch it soar!