They call him The Beast…

Hunter Monahan uses his scars as a shield to hold people at bay. That way no one can get too close and see the vulnerable man underneath the cold exterior. That is until he wins Emilia in a card game, when her no good for nothing brother puts his sister up for collateral.

Hunter knows that the woman he used to bounce on his knee as a child is far too young and innocent to be tied to a cynical, scarred bear shifter, but he made a promise to her mother to look after her little girl. Besides his bear wants his mate, come what may, and he has a score to settle.

Their contract ensures her submission for the Christmas weekend, but Emilia’s instinctive responses work their own brand of Christmas magic on Hunter.

He never celebrates it, but this festive season all he wants under his tree is Emilia, preferably naked, tied, and entirely at his mercy… 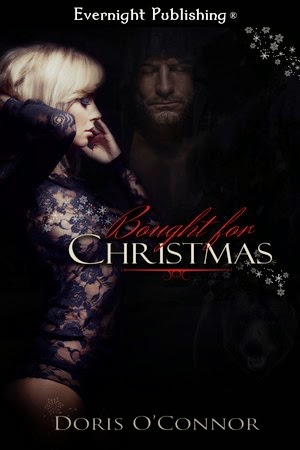 I’m the beast, haven’t you heard….

Christmas is supposed to be a time for miracles and one will surely be needed when Emilia Duncan finds herself sold to the beast to save her father’s company. Having lusted after the much older, enigmatic man for as long as she can remember, spending the Christmas weekend as his submissive will satisfy her raging libido, but can she protect her heart?

Bear Shifter Hunter Monahan cannot stand idly by when Emilia is thrown to the wolves. There is only one shifter who will get his claws into her and that’s him. The contract ensures her submission for the weekend. Too bad his bear wants much more than that.

Glutton for punishment would be a good description for Doris... at least that's what she hears on an almost daily basis when people find out that she has a brood of nine children, ranging from adult to toddler and lives happily in a far too small house, cluttered with children, pets, dust bunnies, and one very understanding and supportive husband. Domestic goddess she is not.

There is always something better to do after all, like working on the latest manuscript and trying not to scare the locals even more than usual by talking out loud to the voices in her head. Her characters tend to be pretty insistent to get their stories told, and you will find Doris burning the midnight oil on a regular basis. Only time to get any peace and quiet and besides, sleep is for wimps.