I’ve often been asked why I chose a circle of friends to write about for my first series.

Bringing a new story about the tight knit group of friends from Fredericksburg, Virginia, was like coming home, especially since I’ve lived in the area all my life. The friends I’ve made over the years, and have continued to keep in touch with, are much like the people in this book—minus the bombs and gunfights. Instead of a weekly cocktail hour, we get together at least once month at a winery, brewery or the lake. 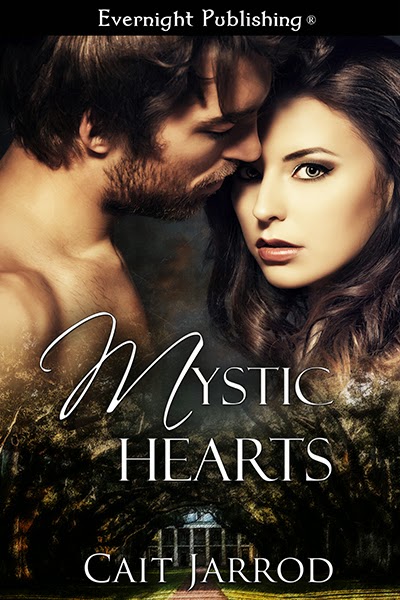 
Nothing is as it seems….

Temptation landed at Special Agent Larry Newman’s feet—literally. Charlene Smith captured his heart after he rescued her from terrorists two months ago. A failed relationship and being an abused child have turned him into a loner and workaholic. The scars weigh heavy on him and keep him from pursuing her. So what’s a guy to do when the woman he pines for passes out in front of him while working a case?

Battling psychological wounds from abduction is easier than coming face to face with the sexy FBI agent she’s fantasized about for months. A single mother, avoiding the drama that dating would bring to her son’s life, she allows Larry close only in her dreams. Now, she's second-guessing her decision. Should she have a relationship with this man who makes her feel alive just by being close?

His breath drifted across her face, stirring a desire she’d only felt once before. Impossible, as Larry had been the only man who’d stimulated outrageous cravings. A hallucination can’t do that. Can it?
He slid another finger down her cheek. She quivered. The electricity produced a throbbing in her body and prevented her from grasping onto any one emotion. One second, she was delusional, the next, she melted. “How can I feel you?”
“You’re not asking the right question.” His voice filled with mischief.
The one she asked seemed important. “What is the right one?”
His hands slapped the wall on each side of her head, trapping her. Anticipating an imprisoned impression, she tensed.
It didn’t occur. “What is the right—” Her whisper broke off when he moved closer, aligning his over six-foot stature perfectly to her five-foot-five frame.
“Why do I allow you?” he asked, his voice teasing.
Good question, yet why did he joke? Was this a game to him? “Why?”
A mere fraction stood between their bodies, and she wanted to taste him, have his lips move across hers.
“I’ve wanted you since the day I saw you,” he whispered.
Her vision cleared. She bit her lip and gazed into his eyes, watching as the gold flecks sparkled. “Larry?” she asked, her voice a little louder than a whisper.
His dark, intense brows that made guys look extremely sexy, lifted. “Were you expecting someone else?”
She shook her head and let her eyes drift down the open shirt. Broad shoulders, flat abs framed by a narrowed waist. He had that sleek, muscled look that said he had kicked ass.
He lifted her chin with his finger, bringing her gaze back to his. “A woman’s wet lips captivate a man.” His eyes shifted to her mouth.
She fought the urge to squirm. The man was potent.
“When moisture forms on them,” his voice dropped an octave, “it lets him know if he’s worthy to touch her.”
The seduction warmed her already overheated body. “Are you…worthy?”
“Your lips say so.”
The air crackled between them.
Her pulse raced, throwing her back onto the merry-go-round ride. This time, her vision wasn’t distorted, her heart was.
“I’ve dreamed of doing this.”
If she was hallucinating, she didn’t want the delirium to end.
He leaned toward her, his mouth coming in for the capture. She couldn’t wait. Her lips parted.
His soft lips glided over hers. The kiss so delicate, so gentle, she felt like the treasure at the end of a rainbow. A gem someone looked long and hard to find. The hallucinations had played tricks on her all night.
Is this another trick?
She had to touch him to find out if she lived a dream or not. She placed her hands on his hardened pecs. Every nerve ending in her palms shot a jolt of awareness between her legs. If this was an illusion, she wanted more. Lots more.
A low growl escaped him, vibrating through her body. He nipped her bottom lip before taking the kiss deeper. His tongue tangled with hers, urging a response and threatening to pull well-hidden passion out of the secure hiding place she’d created two years ago.

From writing ‘every girl’s dream heroes’ to ‘strong, down-to-earth heroines,’ Cait Jarrod twists ‘cliff hanging plots’ and ‘clever, unpredictable sub-plots’. She loves diving into a good book as much as she loves writing one.

Mother of three gorgeous daughters, she’s married to her best friend, hangs out with the WWC, a great group of women, and loves a good glass of wine.

Sign up for Cait Jarrod's quarterly Newsletter, or for when a new release comes out. 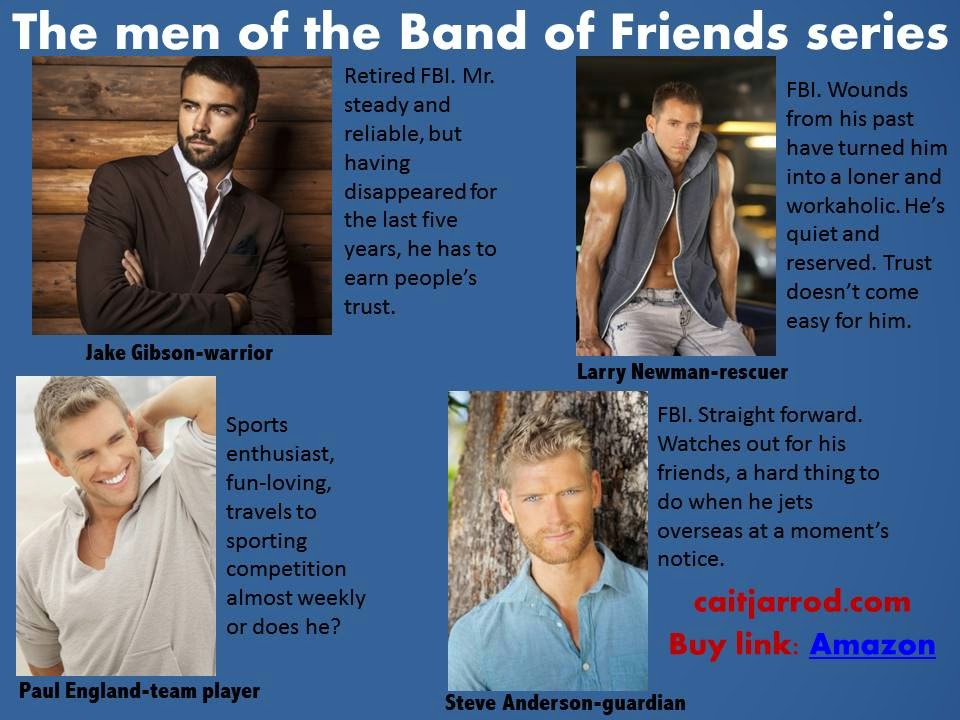 I love Charlene Smith’s journey from submissiveness to taking charge of her life. She figuratively slams her hands on the table and says, “No more.” She’ll no longer allow her ex-husband to control her like he had while they were married. She’ll no longer allow him to use their son as a pawn. Instead of slamming her hand down on a desk or gingerly saying, “No more,” read the excerpt below from Mystic Hearts, Book 2 of The Band of Friends, to find out how Charlene decides she can and will fight.

The venomous tone, at one time, would have had her withering. But not anymore. “Pig!”
Her ex-husband charged toward her, eyes wild, nostrils flaring.
She swung, faking high and going low. The bat connected with his stomach.
“Fuck,” he puffed and clutched his gut. “You’ll pay.” He straightened and snatched the butcher knife from the block on the kitchen counter.
Crap!
The shiny blade glistened above his head.
It was her or him. She dug deep, seizing strength from all the wrongs Andrew had inflicted on her family, fortifying her with the power for what she needed to do. She raised the bat behind her head and went for the homerun...for her...her mother...and most importantly, her son. She struck his arm. Bones cracked. The knife flew out of his hand. He stumbled backwards, holding his wrist, and fell backwards into the wall. She raised it again, aiming for his head.
The bastard is Henry’s father, her conscience screamed.
At the last second, she pulled back and clobbered him square in the ribs.
Yelping, he collapsed on the floor. “You bitch!”
She lowered her hand, clasping the handle, ready to swing. “Not another word. Get the hell out of my house!”
“I’ll be back!”
She raised the bat. “You asked for it.”
“No!” He held up his good hand and sidestepped.

DO YOU BELIEVE IN GHOSTS?

In the romantic suspense Mystic Hearts, I touched on the idea that ghosts exist in Greenwood Manor in Spotsylvania, Virginia. Spotsylvania and the nearby city Fredericksburg are counties some of the Civil War battles were fought.

A sneak peek into the sightings mentioned in Mystic Hearts:

The Madison Hand was a fictitious scare tactic by my oldest brother. He loved to scare and tease me. The Madison Hand, as I described in the book, was taken from one of the many things he invented to torment me. I can smile now with fond memories, but then…not so much.

As for the other item I mentioned, the white patch flowing through the sky was not another tactic constructed by my brother. Each time I saw the bizarre shape and movements, my brother wasn’t home, so I can’t blame or accuse him…

I’m not alone. Others have witnessed peculiar sightings in Spotsylvania, Fredericksburg and the surrounding areas.

People either believe in ghosts or they don’t. Many rationalize the strange phenomena as a freak of nature or their eyes playing tricks on them for a brief moment. Others wholeheartedly trust their sight and know what they saw.

Whatever you believe, I hope you enjoy the websites I’ve listed below.
Spooky Fredericksburg Ghostly Tales and Haunts
Ghosts of America
Haunted American Tours-The battlefields