Thank you so much for hosting me!  “The Treasure Hunters” started out as a movie script many years ago.  I’ve always known I wanted to be a writer, I just didn’t know in which media my passion lay.  I’ve written poetry and I wrote several movie scripts.  The Treasure Hunters was my last one and it was then that I decided I did NOT want to write in such a limited capacity any more.  So I switched to novels and I’ve been in love ever since.

I adore the Roaring Twenties.  Perhaps I have a past life centered in that time frame.  Everything from the lingo to the “live and die” attitude of the times.  It was a grand time for women, a very liberating movement that began with women’s suffrage.  This is my second book set in this time period, and this time, I tackled the horrible end of that golden age…the Stock Market Crash.  The subsequent weeks after October 29th defined the next decade and the attitude of so many people.

In The Treasure Hunters, my heroine, Ruby, feels the weight of the world on her shoulders.  Everything she does is with her friends in mind.  So when she finds a treasure map, she’s full steam ahead.  I consider her adventure a little bit Indiana Jones meets Sahara (the Brooke Shields version).  Happy reading! 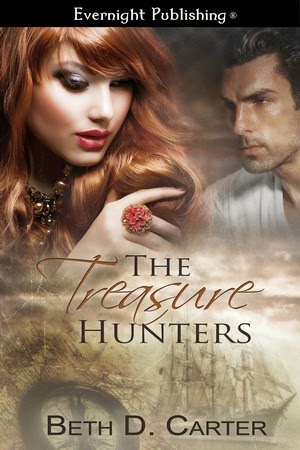 When the stock market crashes on October 29, 1929, it doesn’t take long for Ruby Talcott to lose everything.  Her father’s shipping legacy slips through her fingers.  Alone, destitute, she packs up her two best friends Eden and Merridie, and takes them to England for a new life.

Working in her family’s warehouse of unclaimed cargo, she foils a plot to steal a map.  But this isn’t just any map…it’s to a lost pirate treasure.  Ruby takes the map for herself and convinces Eden and Merridie to go with her to find the priceless treasure.

She finds Captain Sinclair Dardon, a man also hit hard by the economic turn, to sail them towards adventure.  But Ruby didn’t count on her wild attraction to the handsome Captain.  Nor did she expect he has his own bad guys hunting him.

She was vaguely aware her mouth dropped open. Before her wasn’t the typical scruffy-bearded, dirty boat captain.  This man was young.  And handsome.  More butterflies fluttered in her stomach.  He had short black hair that looked like he’d been running his fingers through it in aggravation.  He needed a shave, but Ruby rather thought his slight whiskers enhanced his looks rather than detracted.  Although he looked tough, he had kind eyes––blue maybe, or green.  It was hard to tell in the muted lantern light.  He was tall, muscular, and when their gazes met her heart stuttered in her chest.
“My name is Sin,” he said, introducing himself, although his gaze stayed locked upon her.
“Literally or figuratively?” Merridie asked dryly.
He winked at her.  “Captain Sinclair Dardon.  Who are you, and how may I help you?”
“I’m Ruby Talcott, and that’s Merridie Morgan and Eden Cariker.  We need passage to Africa,” Ruby said, ignoring the odd excitement gripping her insides.  Now was not the time to get distracted by a pretty face.  Oh, but that was easier said than done, especially once he turned those hypnotizing eyes back her way.
“Why do you think I can help?”
“The registry office has you listed on heading to Africa this morning.  We just need a ride.”
“I’m not a passenger ship.”
“We won’t be passengers,” Ruby insisted.  “We can earn our way.”
The way his gaze traveled up and down her body had her blood heating up and leaving little doubt to what was going through his lascivious mind.
“This isn’t a whorehouse either,” he stated.

I like writing about the very ordinary girl thrust into extraordinary circumstances, so my heroines will probably never be lawyers, doctors or corporate highrollers.  I try to write characters who aren't cookie cutters and push myself to write complicated situations that I have no idea how to resolve, forcing me to think outside the box.  I love writing characters who are real, complex and full of flaws, heroes and heroines who find redemption through love.

I’ve been pretty fortunate in life to experience some amazing things.  I’ve lived in France, traveled throughout Europe, Australia and New Zealand.  I am a mom to an amazing little boy.  I’m surrounded by friends and family.  I hate washing dishes but I love cooking. I hate washing clothes but I love wearing them. Writing my bio is difficult because I never know what to say so I hope you like this one.  My favorite color is red but I look best in black (it’s slimming).  I hate people who don't pick up their dog's crap in public places, people who don’t use turn signals, and I really hate people who are rude and condescending. I especially hate discrimination in all and every form.  And although I love holding a book in my hand, I absolutely adore my e-reader, whom I’ve named Ruby.  I love to hear from readers so I’ve made it really easy to find me on the web: