How Long Will I Love You (M/M) ~ Iyana Jenna


First of all, I’d like to thank you for having me on your blog. It means a lot to me. I would like to share with you and your readers my main inspirations of this story.

One day, my dear friend Louis Stevens posted a video of a singer Gavin DeGraw on his Facebook account. It was lovely and I loved the singer’s song. Well, one of my favorite singers is Ed Sheeran and I told Louis it would be a dream come true if Ed sings together with Gavin. A moment later, voila! Louis posted a video of them both singing together! Long story short, How Long Will I Love You was born. The title of this story was from a song but it was another story altogether and it wasn’t sung by any of the men.

By the way, here is the video of Gavin and Ed performing together on stage. I totally fell in love with them. I got completely inspired. My story isn’t in any way a real story about them, though. Heh. I wish! :D

Now if you watch the video until the end, it was their hug that completely melted my heart. *sighs* And here are the real life Ed and Gavin. 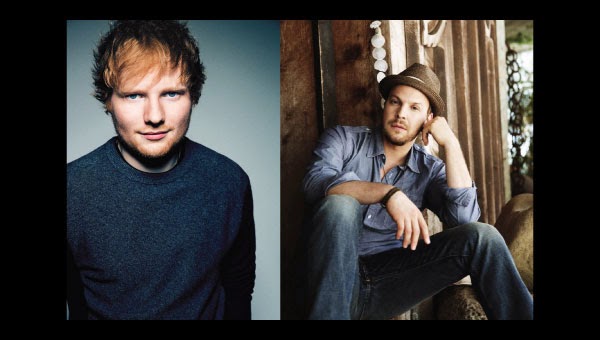 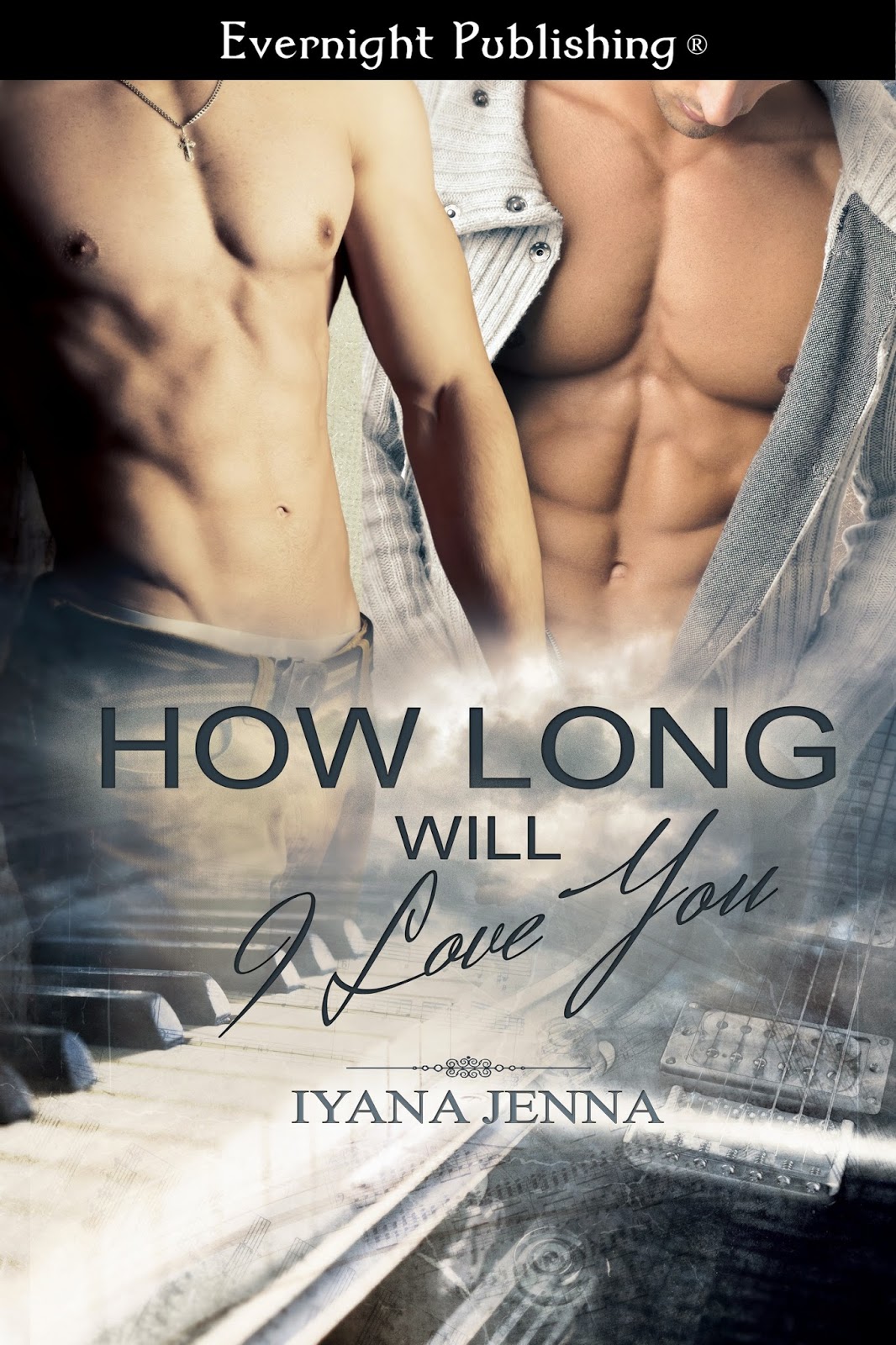 It might look weird for a musician to *fangirl* another musician, but Ed Finley didn’t give a damn. He adored and had a crush on singer and pianist, Gavin O’Malley—to the point of sticking O’Malley’s pin-ups all over the walls of his room. Ed thought his dream had come true when he was scheduled to perform together with his idol on stage.

Gavin O’Malley thought Ed was okay when they ended up being together that night. The night meant everything to Ed, while it was only another one-night stand for Gavin.

Ed decides to stay away while Gavin, after rejecting Ed, couldn’t stop thinking about the other man. Will Gavin get a chance to tell Ed his true feelings?

As soon as he got to L.A., Ed realized the mistake he’d made. Everything reminded him of Gavin, especially the invites to small jam sessions and dinners with fellow artists. He’d tried to avoid them all, but Nina, his assistant, kept reminding him not to miss those occasions.
“Don’t you see that I’m a human being, too? I’m tired, okay?”
Instead of answering, Nina squinted at him before she thrust an envelope at him.
“What’s that?” Suspicion crept into his heart.
“A live awards ceremony. Music awards. Next week.”
“Oh.” He took the invitation and looked at the card. It was a national show and it was going to be aired live on a major channel. It was a big deal. He glanced back at Nina. “Am I a nominee or something?” That was impossible. He’d have found out right away if he was nominated in a category. “Or am I going to present an award? How did you get this invitation?” Nina knew very well this wasn’t his type of thing.
She chuckled softly. The traitor.
“Relax. I didn’t have to kiss someone’s ass or get down on my knees for this. You’re an online phenomenon, Ed. They knew they’d get more publicity if they had you at their show.”
Ed wasn’t particularly afraid of what Nina would do if she wanted something, though he did worry about her sometimes. She’d do anything to get the things she wanted. But this was going to be a huge event with hundreds of celebrities. It was harmless. Safe. Even if Ed saw him there, he could easily slip away and hide. He sighed.
“All right. I’ll go.”
“Yay. I’ll RSVP.”
Ed rolled his eyes as he turned his back on a delighted Nina, who was already on the phone.
The invitation ruined the plan he’d made. Without Nina’s knowledge, he’d made a reservation to rent a cabin on a vineyard resort he often went to in Northern California. He needed fresh air and a place to clear his head. He’d thought being in L.A. would help, but the feeling that he could run into Gavin in any corner of the city kept haunting him. The shame—Ed could not get rid of it. He was lucky Gavin hadn’t talked to a tabloid about how Ed Finley literally threw himself at him and thought he had a chance to be Gavin O’Malley’s boyfriend.
A week or so on the vineyard would do him good. Too bad Ed had to postpone it now. He took a shuddering breath and cooked up another plan. The minute he left the award show, he would be on his way to escape to Moonshine Valley.
****
Nina walked ahead of Ed on the red carpet. He smiled inwardly at the sight of her—a diminutive figure, yet looking confident and ready to take any action Ed needed her to. Tonight she was lit up in her small, bright red dress with her golden hair tied up into a small chignon. She was pretty, Ed would give her that. He wouldn’t mind having her as his girlfriend if he liked girls. As it was, Ed didn’t mind taking her as his date tonight, though she might have minded if he’d insisted on going in his shirt and jeans.
“Ed!”
Ed jerked his head up. “Yeah?” He had been unaware of zoning out for a second there.
Nina gestured at him impatiently, so he headed toward her. She was standing near the velvet railing with a man on the other side of it who had a microphone in his hand.
“Hi,” greeted Ed. “How’re you doing?”
“Can you believe it? Louis Montague from the blog Louis’ Notes, himself! He wants to talk to you, Ed.” Nina sounded too chirpy for his liking, and his eyes narrowed in suspicion because the girl knew him well. He turned back to the man and offered his hand. Louis accepted and shook it hard.
“Ed Finley. It’s so great to finally see you.”
“Hi, Louis. Glad to see you too. I hope you like my songs.”
“Like your songs? I love them. They’re brilliant, man.”
“Come on.” Ed felt positively embarrassed. After all this time, he still couldn’t believe people actually listened to his work. He looked around and cursed silently when he found that Nina had disappeared.
“I’m serious. They’re emotional and fans really relate to them. I can’t stop listening to them. What’s coming up next from you?”
“Um.” Ed scratched his head, then promptly removed his wandering fingers. He’d spent more time than was necessary trying to tame his red curls, and he knew Nina would scold him for ruining them. “I write songs every night or between shows. I can’t stop the ideas from coming into my head. They keep bugging me until I write them down.”
“Sounds so easy for you.”
“Oh no, not at all. They’re raw ideas and thoughts. Mostly I still have to find the right tune for them, not to mention the lyrics and the music arrangements. Half of the raw ideas I have had have ended up in the garbage bin. Only half became full songs and just one or two of them get to be produced.” Ed thought he heard Louis mutter something. “Excuse me?”
Louis shook his head. “Nah. Just—if I tried to write songs, they would all get dumped.”
Ed snickered. “You don’t know that. You should try writing someday if you get an interesting idea.”
“I’d rather listen to yours, thanks.” Louis smiled widely. “So are you going to present an award tonight?”
“No. I’ll just sit tight and sweet in the audience. My pretty Nina did a good job finding me a place in there. She—” Ed waved sideways and stopped short. He gaped and his breathing became erratic. He hadn’t expected anyone to be standing next to him, to be so close to him, like…like…
“Hi, Ed.”
Like Gavin. 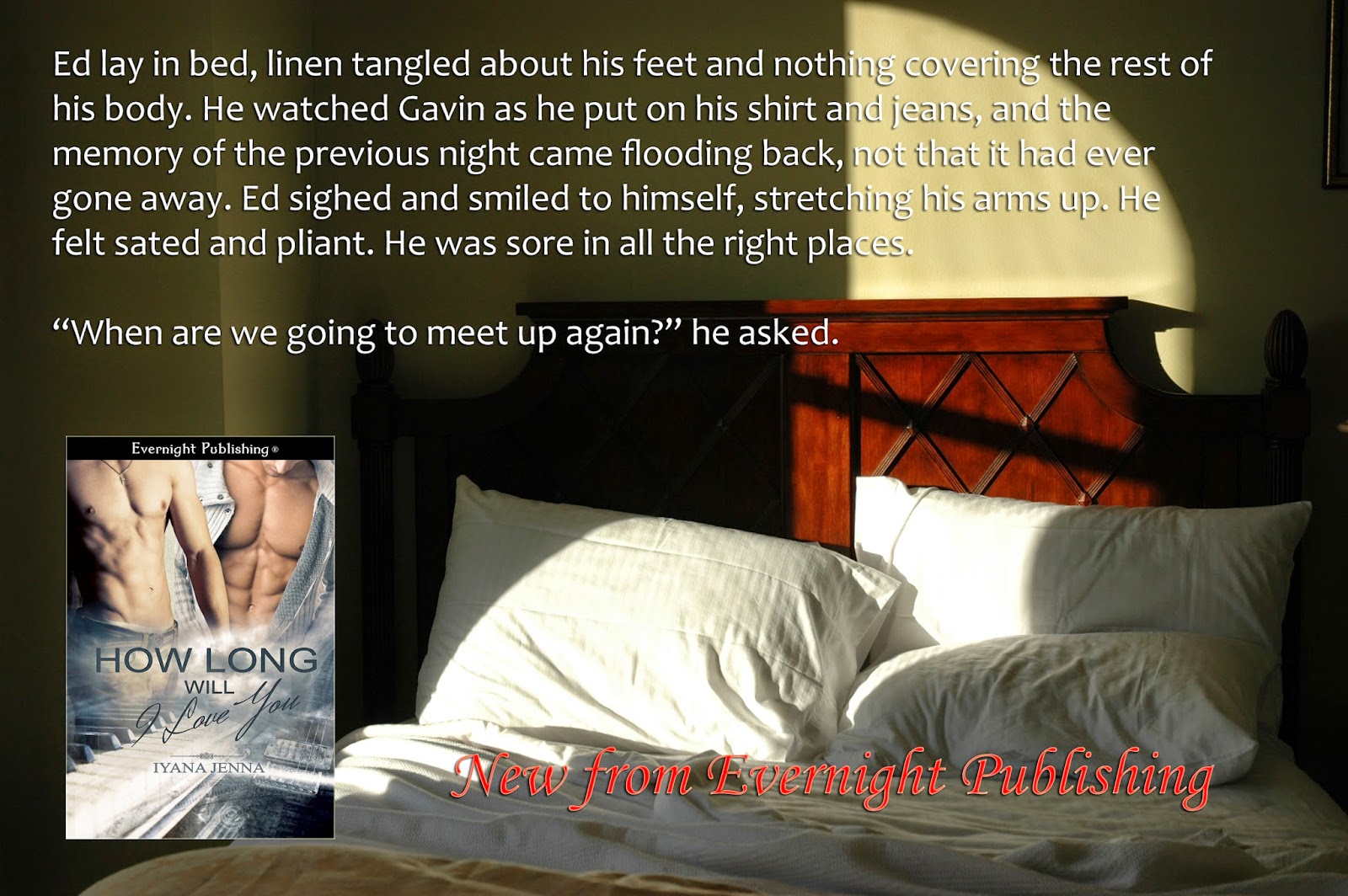 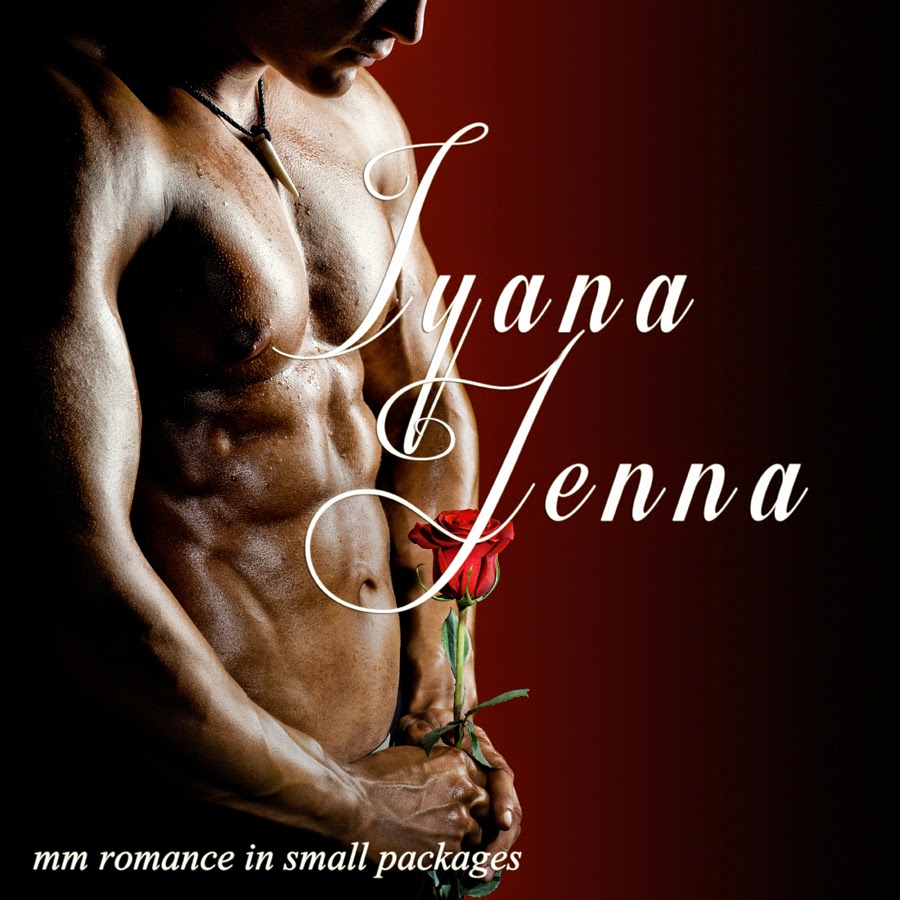 Iyana lives in Jakarta, a city famous for its traffic jams, a lot of cars and motorcycles, and people selling stuff on the roads. You can spend two hours on the road going to a place you can reach in half an hour in a normal situation. Thanks to the traffic jams, though, Iyana can come up with a lot of stories, mostly shorties, as she prefers to spend the time during her trips writing into her cell phone rather than sleeping.

Another thing Iyana loves is kitties. Right now she has three of them. Their names are Cil, Horus, and Betsy, and one kitten. When she doesn’t write, she plays with them, or they would play with her when she writes.