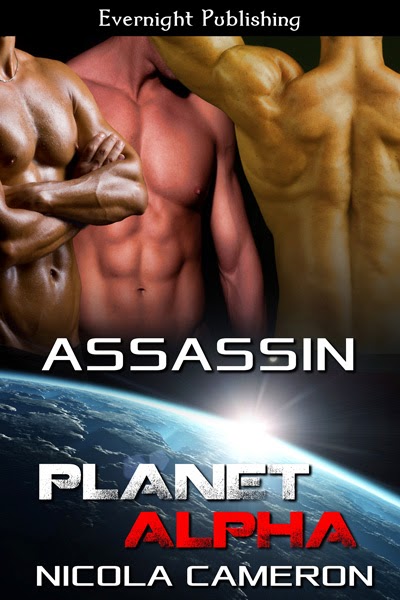 While hunting raiders, Duncan Shea and other members of the New Black Watch run into a deadly ambush. Injured and alone, Duncan stumbles across a grounded shuttle carrying an Alphan warrior named Taric and a mysterious Xyran named Zhan. The handsome aliens agree to help Duncan, but he quickly learns they also have a plan of their own -- to claim him as their mate.

Forced to hide their bond from their respective governments, Taric and Zhan never expect to find their third bondmate while on an unauthorized mission to stop a vicious Xyran slave master. Neither of them can resist the urge to claim Duncan, but will their new mate help them catch their old foe, or turn them over to Earth -- and Alphan -- justice?

Duncan stepped back as the airlock hatch rose, revealing a huge golden Alphan warrior in a black uniform. A brief memory flickered across his mind, an afternoon with a tall, broadly built watchman who had tumbled him laughing into a bed of leaves before fucking him senseless. The sex had left him with a distinct appreciation for men built on the alien’s scale.
“Greetings, human,” the Alphan said, golden eyes staring at him curiously. “Are you in need of aid?”
The low, rumbling voice knocked him out of the memory. “Uh, yeah. I mean, yessir,” Duncan said, wondering if he should salute or what. “Name’s Duncan Shea. I’m with the New Black Watch.” He showed his right arm, where a band of green and blue tartan had been clumsily sewn. At the alien’s puzzled look he added, “It’s a guard unit. We were tracking some thieves when we got ambushed about five klicks from here.”
The alien glanced at the woods behind him. “You are alone?”
Duncan grimaced. “My men are dead. Bastards planted some kind of mine in the woods.” Like an alien’s gonna know what a mine is. “You step on it, it blows up,” he clarified. “You heard anything about that, sir?”
The Alphan’s eyebrows rose. “About … mines?”
“Or thieves, sir. Local ones.”
The alien shook his head. “I know nothing about local criminals, Watchman Shea. Nor do I know anything about human explosive devices.”
Duncan sagged. Even if the Alphan was lying, there was no way he could prove it. And forcing his way on board an alien ship, even if it wasn’t hiding outlaws on board, was suicide. “All right, thank you.” With a weary tip of his hat, he turned to go.
“Wait,” the alien ordered. “You were injured in this explosion.”
It was a statement, not a question. Duncan shrugged, then winced as his cold, tight muscles cramped with the motion. “Got banged up a little, yeah.”
This time the Alphan glanced up at the gunmetal sky and the cold rain pouring down. “This weather is not safe or healthy for an injured human. Board my ship and I shall assist you.”
It was Duncan’s turn to raise his eyebrows. “‘Scuse me?”
“Did I use your language incorrectly?” The Alphan switched to a loud, slow tone. “Board … my … ship … and—”
Duncan shook his head. “I got that. I meant, why are you gonna help me?”
The alien smiled. It made his craggy, handsome face more human, somehow. “My race signed a treaty with yours to offer assistance when and where we could. As such, it is my duty as an Alphan warrior to assist an injured human warrior.”
“Oh.” That did line up with what he’d heard about the gold aliens and their sense of honor. “Well, sir, in the case, I’d be pleased to get out of the rain for a spell.”
The Alphan stepped back, and Duncan climbed into the airlock, pulling off his hat and swallowing a moan as the warm air hit his cold, wet skin. “Oh, that feels good.”
“I imagine it does.” The Alphan towered over him by a good six inches, and a pair of pointed black horns on his forehead added another inch of height. Duncan couldn’t help checking out the thickly muscled body straining the seams of its uniform. While he was in good shape, he suspected that the Alphan could crush him like a bug.
Or throw you down and fuck you silly, part of his mind suggested.
He shivered pleasantly at the thought. “Um, do you—”
“What a sodden creature,” another voice said sourly. “Do we let it drip dry, or do we wring it out?”

Nicola Cameron is an expatriate Chicagoan who has lived in England, Canada, Holland, and Sweden, and keeps a confusing amalgamation of languages in her head as a result. Currently located in the clavicle of Texas, she has finally mastered the proper use of "y'all," much to her Chicago family's dismay.