Hi everyone! I’m thrilled to be here today with my recent release, A Tempest of Passion.

Back in 2013 an idea formed in my mind. Now, to be honest with you, I don’t quite remember how it happened. It could have been my Muse whispering in my ear, a picture I saw or a song I heard… I’m not sure. What I do remember is that two elements stuck out in this idea: a wolf shifter named William and the time period, the regency era.

With those two items, I set my fingers on the keyboard and wrote 50.000 words, successfully completing Nanowrimo 2013. Soon after, in an email I sent to a friend, I told her: “The story needs a lot, I repeat, a lot of editing. I’ve written like a maniac but I’m very aware that some of the things on there don’t make too much sense. It needs to be fixed.”

It wasn’t a pretty sight. A few months later, I went into full editing mode, but alas, I was not happy with the result. There was something wrong with William and Emily’s story, which back then was titled Cry of the Lone Wolf.

I set the novel aside, upset that I could not figure out what was the problem. I spent several months working in other projects, trying to forget a shifter exiled from his pack and a woman that wanted nothing to with marriage. They were impossible to forget. I would see regency era pictures, pictures of women and wolves, men that resembled William, women that reminded me of Emily… and they would come to mind, begging me to finish their story, to make things right.

Finally, a few months ago, inspiration struck. Chapters were rewritten and erased, names were changed, new characters were introduced… and a story that started like a little summer drizzle became a full blown Tempest of Passion.
I hope you enjoy it! 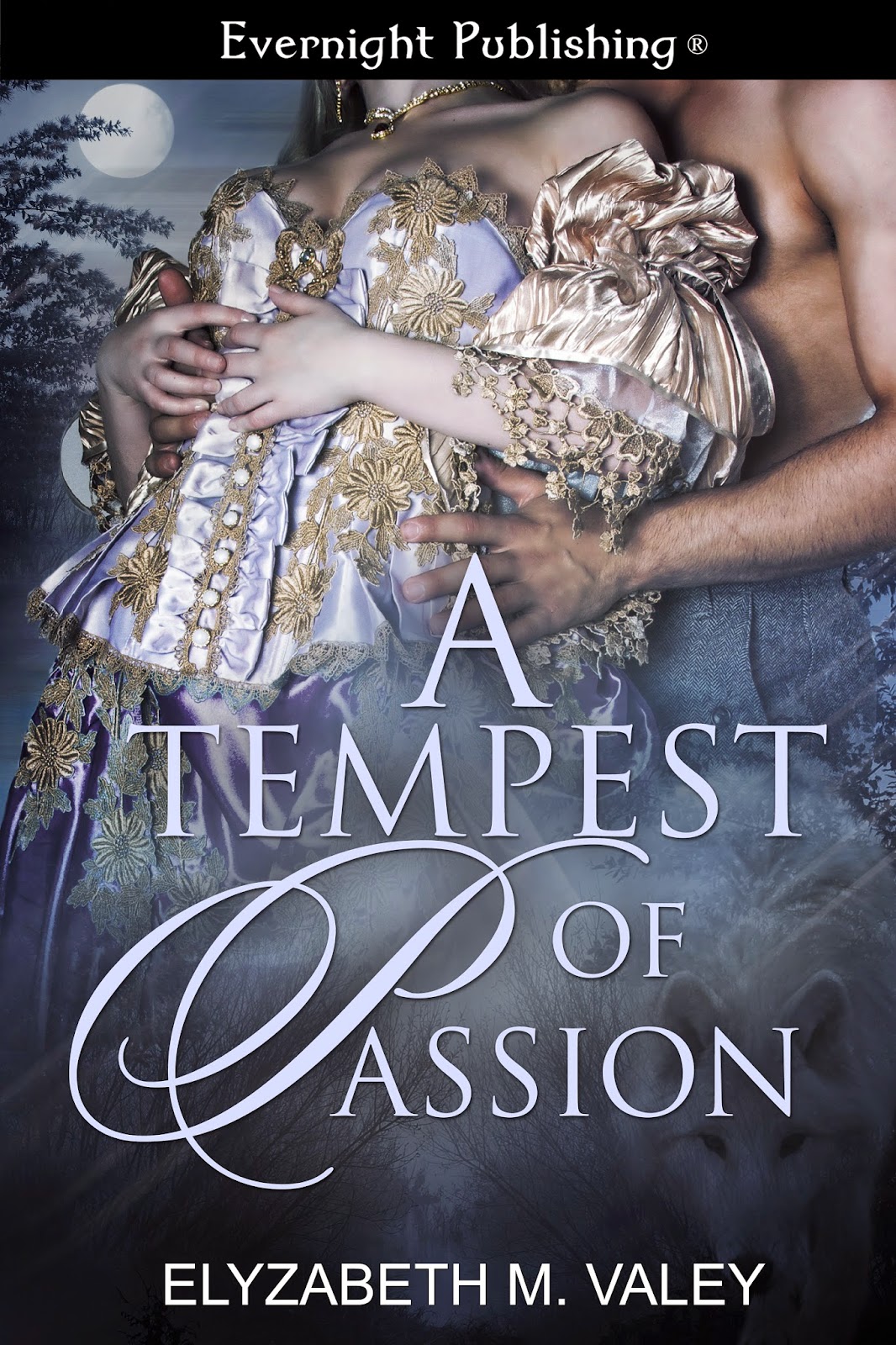 Emily Bunsbury is most definitely not a fainter. She prefers to leave that sort of shenanigans to young debutants and to those desperate to land a husband. She is neither.

Except last night she passed out and was rescued by none other than the town’s most eligible bachelor: William Dalton.  Of course, she wants nothing to do with him, but her heart and body don’t seem to be in agreement…

Banished from his pack for a crime he did not commit, William Dalton does not have the desire or the time to court women, yet, when he meets Emily Bunsbury he is incapable of staying away. Certain that it is nothing more than a passing fancy and not the mating pull, he pursues her.

However, as the unknown threat that expelled him from his pack strikes again, William realizes that Emily means much more and he must keep her safe. Now, if only she’d agree to his terms…

As danger grows with each passing day, will the couple learn to trust each other or will their love be nothing more than a temporary tempest of passion?

“Perhaps you can enlighten me. You’re an accomplished dancer as far as I can see and you seem to enjoy it, even if you did tell me you didn’t particularly like it. Why don’t the other men ask you to dance? Must I be on the lookout lest you do something outrageous?”
They reunited on the floor. Emily extended her right foot forward allowing her weight to rest on it before closing her other foot and hopping. She bit back a smile.
“I think most men in town surrendered in their pursuit for me to dance,” she admitted after a moment. “I refused all of them for what I spoke was the truth. I am not fond of dancing.”
“Yet, you’re not chewing on your lips or pulling them in as you have a habit of doing when carrying out unpleasant duties.” William chuckled.  “Just like that. Why always so serious, Ms. Bunsbury? Is my company such a heavy weight on your shoulders that you cannot gift me with a smile?”
“Life is serious business, Mr. Dalton,” she replied, going around him in a circle. “There is nothing more odious than being forced to smile.”
“Of course, I know it well.” His friendly smile vanished, his eyes losing their luster.
“I did not mean to upset you,” Emily hurried to clarify, suddenly desperate to see the gay light present in his eyes again.
William’s lips curled upwards, though the gesture did not reach his eyes.
“It was not your fault, Ms. Bunsbury. You inadvertently awoke some sad memories. Life is serious business,” he conceded, twirling her, “but that is precisely why we must enjoy the precious good moments such as these, for we never know how long they will last.”
“Your opinion of good moments is definitely low if you count this to be one.”
She was teasing him. By God, she was teasing him and though it took him a moment to realize it, she was glad at the sound of his rich laughter. Her lips twitched and she found herself smiling in response to his boisterous mirth.
“Of course I do,” he said after a few seconds. “I am dancing with a beautiful woman on a fine autumn day. It cannot get much better than that?” He winked, reminding her of his ulterior masculine motives and causing her cheerfulness to vanish. “Though you probably think differently,” William added.
“Indeed.”
The melody having come to an end, Emily curtsied and turned to walk away from William Dalton. She’d barely removed herself from the center of the room, when he gripped her elbow. Emily bit back a gasp. Every time he touched her something inside her awoke with a hunger that could not be appeased. Tilting her head back so she could look him in the eyes, she chose to ignore the way her heart leapt.
“That was only one dance, Ms. Bunsbury. You promised me two.”
“Surely, you wouldn’t want to waste your good moments dancing another tune with me, Mr. Dalton.” She made to leave but his fingers on her arm tightened. Anger flared in his eyes and his good-natured smile vanished.
“You think little of yourself, Ms. Bunsbury. I am surprised.”
“You are in the wrong, Sir,” she said as politely as she could muster. “I simply believe that another woman would enjoy your attentions much more than myself.”
Pulling her arm from his grasp, she veered around, desperate for some fresh air. Faster than she could muster, he stepped in front of her, blocking her path. Curling her hands into fists, she fought against the urge to shove him out of the way.
“Mr. Dalton—!”
“Ms. Bunsbury.”
Emily’s eyes flew to his face at the warning in his tone, her wroth vanishing and scattering into the wind as their gazes clashed.
“I don’t take kindly to broken promises,” he whispered gruffly.
Her breath caught as he reached for her hand, his fingertips sliding sensually over her gloved wrist. Her pulse raced, urging her to move or succumb to the persistent throbbing between her legs.
“You may think yourself fast as a rabbit or cunning like a fox, Ms. Bunsbury, but I am a hunter and catching prey is my favorite sport.”

Considered weird by normal standards – what is normal anyway?- Elyzabeth M. VaLey enjoys making up songs about mundane things, doodling stars and flowers on any blank sheet of paper, talking to her Lab whenever he feigns interest and coming up with love stories to make readers dream.

From contemporary to historical or fantasy, she enjoys writing stories about good and evil, love and passion and all that comes in between happy ever after.