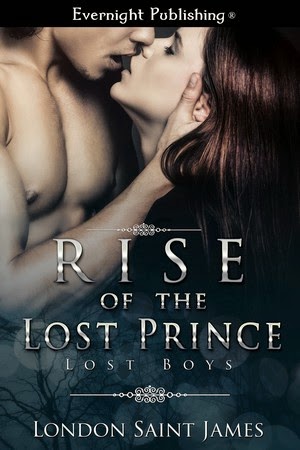 They fight to protect those who would never welcome them into the human world...

Petúr always knew he and his brothers-in-arms were different. Something more. Something not human. Yet, he never expected to find out the truth of their origins, nor fall for a human woman whose father was set to destroy Neverland.

Ever since she was a child, Wyndi dreamed of an angel with eyes of the purest gold, although she never really believed such a man existed until she met the hauntingly beautiful Petúr of the lost boys.

With a prophecy to fulfill, a woman to protect, a portal to find, and evil darklings out for blood, will Petúr be strong enough to rise up and claim what’s rightfully his, or lose everything to a long-time nemesis, Grapple the Dark?

“Where are we going?” Wyndi asked.
“My room.” Five rapid heartbeats later, they were inside his bedroom with Petúr kicking the door closed behind them. “I need to know something,” he said in his honey tones.
Wyndi glanced up at him from under her lashes, and shivered. He was staring at her with eyes glinting gold. The braid he wore in his hair dangled down the right side of his cheek, tickling her.
“What do you want to know?”
“This.”
Petúr bent his head, slanted his mouth over hers, tongue tasting the line of her lips until she parted them on an intake of breath. When their flesh met, she closed her eyes. Fireworks exploded inside her head, the luminous sparks floating, then falling, falling, and transitioning into a force crashing down over her—a title wave of longing. She moaned, tasting the summer sky, morning dew, the sweetness of rainbows, sultry nights, and rain storms.
Mind whirling, her body shifting, she was lying on her back, fingers tangled into the nape of Petúr’s satiny hair, the other hand pressed against the steely strength of his shirt-covered chest. Every part of her became aware of him on some sort of molecular level. Yet nothing could have prepared her for what she experienced when he tucked himself between her thighs and groaned. Heat slammed into her core. Her stomach quivered. Her panties dampened. An inferno. Yes, surely it must be an inferno which lapped at her skin while their tongues tangled into infinity.
****
Petúr was lost in an ocean of sensation, wave after wave, pulling him under. The connection to this woman beneath him was undeniable. Everything about Wyndi filled him up until there was nothing but her. Her taste. Her touch. Her scent. His chest expanded.
Damn, her scent. She tasted better than the cotton candy fragrance that wafted from her skin. Skin. Oh, yes, skin. That’s what he needed, to feel her soft skin against his.
“Wyndi.” He breathed, saddened to break the kiss, reaching over his shoulder, yanking the material of his shirt, lifting up with the other hand, and pulling the garment from over his head. “I must feel your flesh against mine.”
Her tongue darted out, licking her lips. Was she nervous? Well, he’d be the balm to soothe those nerves. He focused on her mouth. Those delicious lips were kiss swollen and moist, making his cock strain even more against the constraint of his pants.
“Okay,” she said in a small, breathy voice, the lids covering her blue eyes at half-mast.
He reached for the hem of the too big nightshirt covering the body he had to see, lifting until he revealed her little white panties and lacy bra covered breasts. Blood raced through his veins. He wanted to do everything with her. To her. Touch all over. Taste every inch of her. Put his fingers and cock into the tight, warm sheath he knew was awaiting him.
Take her. Hell yeah. Those two words became a chant within his mind. He wanted to take his woman in every position he could imagine and then some. His woman? Yes. Yes she was his, or would be. Slow your roll. You don’t want to scare her. He had to maintain. He couldn’t go at her like some out of control beast.
Leaning down, he kissed between the creamy mounds of her cleavage, skimmed his cheek across the apex of her right breast, watching goose bumps scatter across her flesh in a wanton invitation. Unable to stop himself from licking her, he lapped at her in one, long, lingering stroke, from the top edge of the bra, up her collarbone, only stopping because the material he’d lifted hindered his progress being bunched around her neck.
“Oh, hell,” he muttered. “You taste so good.”

London Saint James has lived in many places, but never felt “at home” until she met the real-life man of her dreams and settled down in the beautiful Smoky Mountains of Tennessee. London lives with her husband and their fat cat who thinks he owns them.

As an award-winning, bestselling, multi-published author, London is living her childhood dream. She knew all the scribbling she did, that big imagination of hers, and all those clamoring characters running around in her head would pay off someday.

You can also e-mail London with any questions or comments at London@londonsaintjames.com. She loves to hear from her readers.