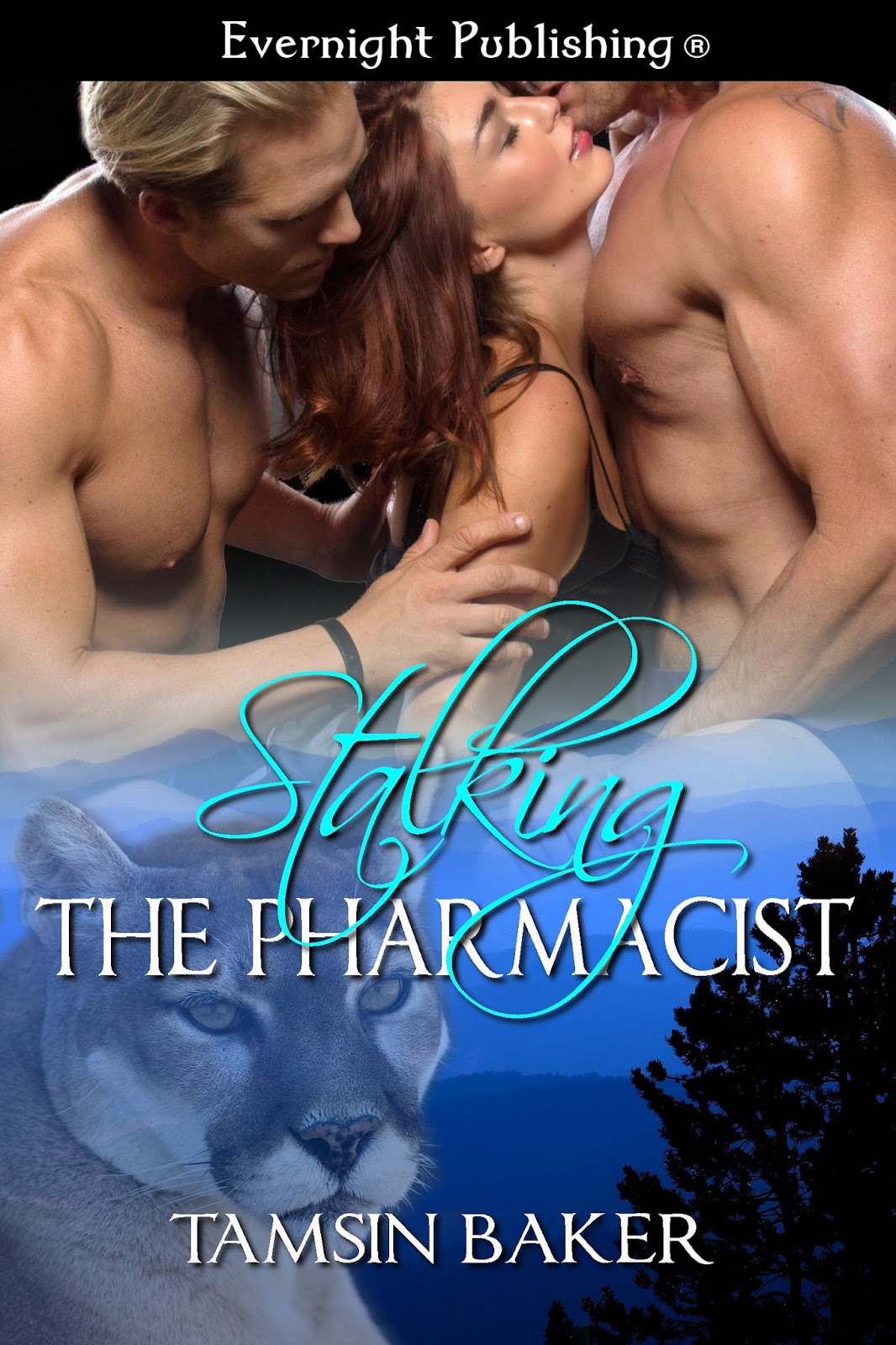 The voluptuous Ashleigh flies into a small town at the base of the Rockie Mountains for two reasons; One, a holiday to clear her head and give her some space from her abusive ex-husband. Two, to attend her gorgeous cousin’s wedding. The last thing she expects to see is her beloved cousin Laura marrying two men, and to find herself irrationally attracted to another pair of twins.

Scientist Scott and Football-coach Jack are a perfect pair of Rockie Mountain lion shifters, who made the horrible decision when they were young to break from tradition. They each married a woman who made their lives miserable rather than search for their destined mate, and now into their mid forties they’re struggling with their everyday life.

All the signs show them that Ash is their true mate. Jack is eager and ready to chase, but Scott’s scars run deep. Will they be able to overcome their past to create a new future?

“You came!” Laura cried and threw her arms around the woman in silver, who laughed and hugged her back.
Come on, come on.
Laura pulled back and stared at her cousin.
“You look like shit, Ash.”
Jack frowned at Laura. That wasn’t a nice thing to say to her cousin, let alone a woman that beautiful. Jack’s balls tightened as he took in her voluptuous figure. He usually dated women who were ultra fit and trained hard to minimize their body fat.
He was instantly converted to women with fuller figures. Such incredible breasts and lush hips should be admired, not exercised into nonexistence.
He’d never look at a woman’s body the same way again.
The woman Laura had called Ash, sighed. “Thanks, sweetie, I know. Whereas you look bloody fantastic.”
Laura did a twirl and stuck her hip out at an angle. Cheeky woman.
“Why thank you, darling. The love of a good man…and all that.”
Ash quirked an eyebrow at Laura. “Or men, perhaps?”
Laura blushed and stared at her cousin, her mouth tugging down. “Yeah…well…”
Ash, who Jack was dying to touch, smiled at Laura with genuine warmth and love. “As long as you’re happy, honey.” Next to him, Scott shifted from foot to foot, just as impatient as Jack himself. Laura whirled around, seemingly just remembering that they were standing there waiting.
“Oh, Ash, let me introduce you to Brandon and Tyler’s cousins. It’s common in their family for men to be born into nonidentical twin sets. This is Scott and Jack. Guys, this is my cousin Ashleigh.”
Jack jumped and stepped forward with his brother, their backs ramrod straight as they stared at the woman in front of them.
Ashleigh’s face turned cold, her mouth pulling down on both sides.
“Nice to meet you gentlemen.”
Her tone was like ice, yet Jack wasn’t deterred. Whatever her baggage, they could cope. God knew they had enough of their own.
He stuck out his hand at the same time as Scott. He would have laughed if the moment hadn’t been so serious. This was it. With this first touch they would know if Ashleigh was the woman they’d waited twenty-five years for.
She looked at their hands as though they were the lowest form of life, but neither of them dropped their arms away.
No fucking way, beautiful. Pick one. Touch us.
Finally, Ashleigh sighed and reached up to shake Scott’s hand.
Watching it happen rather than being the first one to experience it hit Jack in the guts with disappointment, but he didn’t even blink, in case he missed something.
As her hand connected with Scott’s, Ashleigh gasped and her face reddened. Her knees obviously weakened as she began to crumple and sink closer to the ground.
Jack jumped forward to catch her and electricity shot through his body, straight through his arms and into his core, making his body want to meet the dirt himself. He groaned in time with Ashleigh, and she dropped Scott’s hand to cling to him.
Jack forced all of his strength into his legs and locked his knees while pure pleasure replaced the electrical pain. Like a cleansing white light, it slid through his chest and down his arms and legs.
She’s ours.
Ash stared up at him, her blue eyes shocked and vulnerable. Her lips parted as she took a breath, and Jack fought off the need to kiss her. His heart was thumping in his chest, and his cock stirred in his suit pants.
Ashleigh began to struggle in his arms, her eyebrows lowering as her mouth took on an angry tilt. Jack reluctantly let go of her solid warmth as soon as he was sure she could stand, and she staggered toward Laura. His arms were still tingling like he’d lifted weights for too long, yet he yearned to have her back and pressed against him.
“What the fuck was that?” Ash spat at them.
Jack bristled and lifted his hand in a sign that everything was okay when he heard several male cousins around them growl in warning.
Jack shared a look with his brother, then stared back at Ashleigh. What was the next step now?
“Ash, how long are you here for?” Laura asked, forcing Ash to stop staring at them like they’d committed some sort of crime.
“A week or so. I took some leave.”
Hell yes! They had time to convince her that she had to stay.
“Brilliant. We’re going away for the weekend, but have honeymoon plans for the summer. Will you stay with us next week when we come home again?”
Ash glanced at Scott and Jack for a moment, her brilliant blue eyes troubled. She looked back at Laura, nodding slowly.
“Yeah, sure. I’d love to catch up properly with you.”
Jack cleared his throat and held out his hand to Ash once again. He may as well start the ball rolling. They had the weekend to woo her, and he didn’t want to waste a single moment.
“Would you like a tour of the property?”
Ash glared at him with impressive strength. If she’d been a mountain lion, her fur coat would have been bristling and standing on end.
“No bloody way, and keep your hands to yourself.”
Ash turned tail in a flurry of silver silk and beautiful brown hair. Her back was ramrod straight as she stomped her way up the steps and into the house.
She’s got spunk. He had to admit, he was already proud to call her theirs.
Laura giggled, drawing their attention.
“You two are going to have your hands full with Ash if she’s yours.”