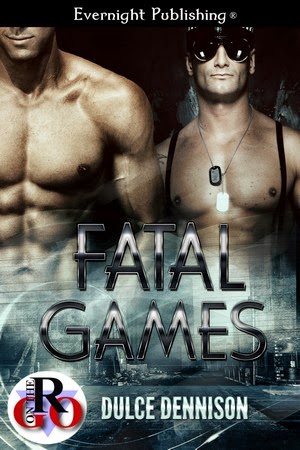 When a ghost from his past begins to haunt him, Griffin loses the only man he’s ever loved. Not one to be knocked down for long, he joins the local police department, donning the badge once more, determined to catch his lover’s murderer. But the killer isn’t done with him yet.

When a rash of crimes breaks out, all targeting Griffin, he knows that his dates are numbered if he can’t catch the person responsible. With fellow officer, Garrett Peterson, aiding his investigation, Griffin knows it’s only a matter of time before he catches the killer. What he doesn’t count on are the developing feelings between Garrett and him.

But how can be possibly make time for love when his life hangs in the balance? With an overactive imagination and a penchant for making up stories, was it any wonder Dulce Dennison decided to be an author? From cowboys to shapeshifters, she has a story for them all, but her passion lies in writing m/m romances. Dulce believes in love in all shapes and sizes, and that everyone deserves a happily-ever-after.

Married since 2000 to a man she isn’t sure is quite human, her husband and children (whom she fondly calls the demon spawn) keep her busy, but never too busy to write. Is there such a thing as too busy to write? Most mornings you can find Dulce set up with her laptop, a cat curled up next to her, and a steaming cup of coffee just an arm’s reach away.